Celebrating the 60th anniversary of the Tamar Bridge 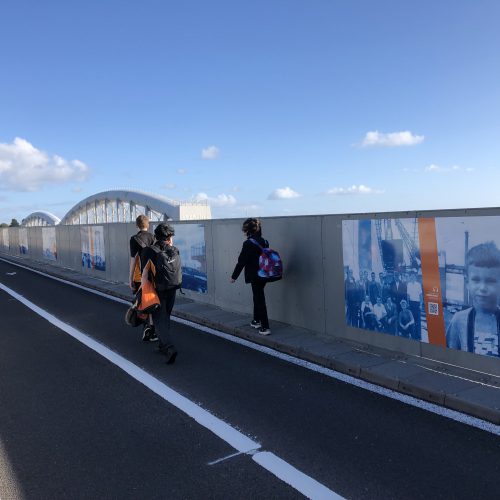 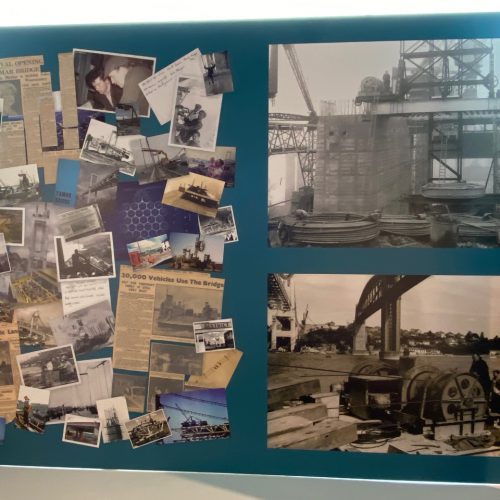 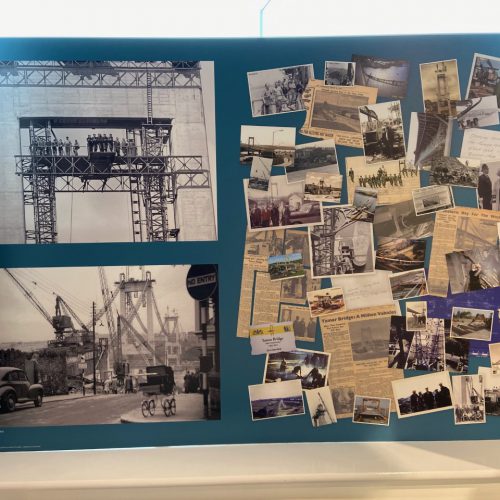 This weekend the Tamar Bridge celebrates its 60th anniversary with a range of exciting events and activities to mark this very special milestone in the history of the iconic structure.

Designed by Mott Hay and Anderson, and constructed by Cleveland Bridge and Engineering Company, construction began in July 1959, with the bridge finally opening to traffic on 24 October 1961. The £1.5 million bridge, owned and operated jointly by Cornwall Council and Plymouth City Councils, was officially opened by the Queen Mother on 26 April 1962. 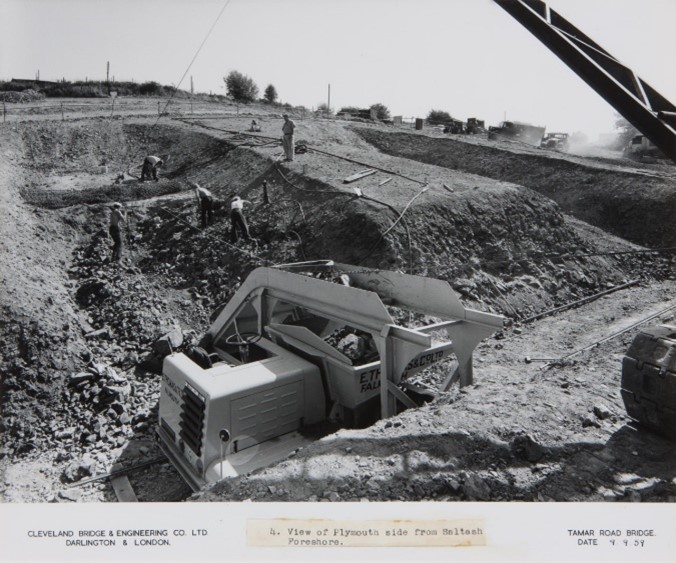 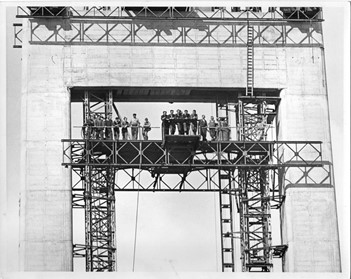 Start of the excavations in September 1959. ( Nicholas Horne for Tamar Crossings)

The unfinished bridge that is open to traffic (Ann Robinson collection)

In 1961 the bridge was used by approximately 4,000 vehicles a day. Today over 50,000 vehicles use the crossing on a busy day – over 16 million vehicles a year – ten times the number carried in the early years.

The 60th anniversary marks a very special moment in the history of the Tamar Bridge.
It has been wonderful to hear new stories about the workers who helped to design and build the bridge, as well as the people who crossed it for the first time when it opened in 1961.
We are delighted to be able to share these memories with visitors to the Learning Centre and would encourage as any people as possible to take this opportunity to find out more about this iconic structure.

During the summer, members of the public have contributed some fascinating stories about the Bridge which now form part of the Bridging the Tamar archive. Some of them colourfully illustrate what life was like on a construction site 60 years ago and can be heard using a QR code on a series of new panels which have been installed across the South Cantilever on the Bridge.

Here are some extracts from their stories :

My Mum asked me, ‘you’re not afraid of heights Mike are you?’..they’re offering £100 a week for people to paint the cables. I got the job and off I went. We had only been a third of the way down when the foreman called us back down on his loud hailer. … When we went across there to the Unigate Dairy the people in charge there said ‘we got a really bad problem’. And they had speckles of paint in their milk! Well the paint that we used was lead based. Because we had to drink two litres of milk a day to counteract if we had the fumes of the paint.

My first week’s wages at seventeen was One Pound Seventeen and Four-pence which is about £1.70 and I got a £1 a week danger money. There were probably a hundred, two hundred men working on site two hundred feet up with no toilet facilities. They employed an Irish labourer whose nickname was ‘Jim the ****’. His job was to go and empty various buckets places across the whole of the bridge section. They had a twenty foot motor boat continually cruising up and down the river in case anybody did fall in. There was me at seventeen sat on two scaffold planks, two hundred and fifty feet over the Tamar, drilling ¾ worth width holes into a cast steel structure!.

A selection of the oral histories and photos which have been shared will be on display in a special exhibition in the Visitor and Learning Centre from Monday, 24 October so that visitors and locals can enjoy them.

People have also loaned, donated or shared some extraordinary old photographs of the bridge 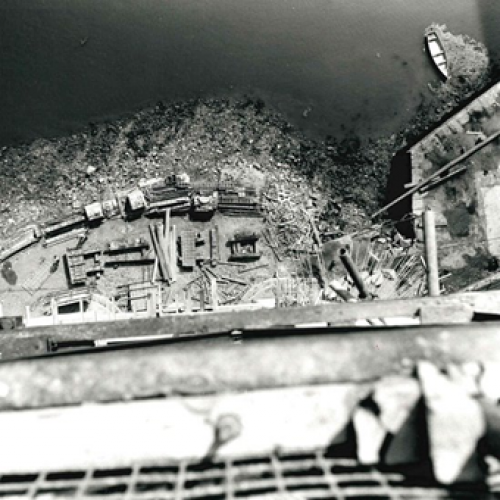 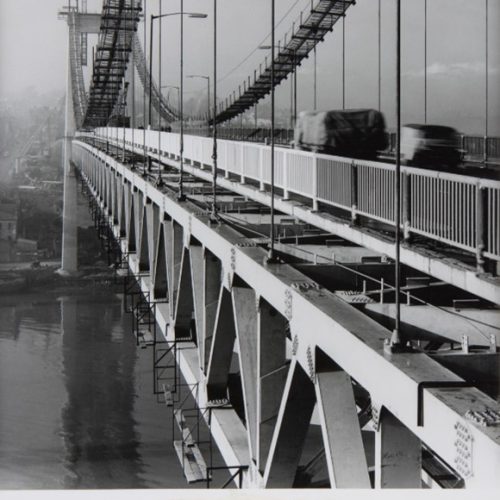 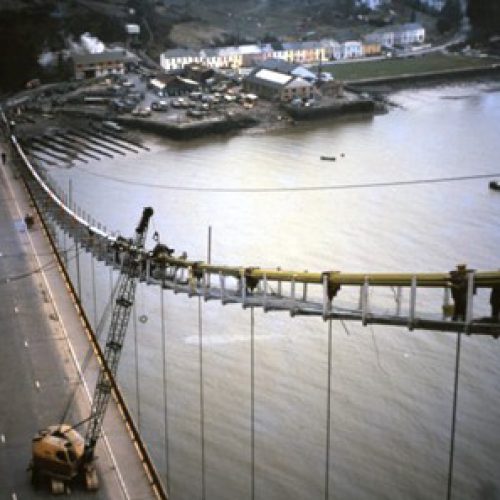 The Bridging the Tamar Learning Centre has been working in partnership with local Community Interest Company Fotonow to work with young people in Plymouth and Saltash and explore the Tamar Bridge’s history, its presence today, and the environmental landscape.

The creative media programme has connected young people with the history of the bridge and they have learnt new skills in photography, filmmaking and audio recording. Students from Marjon University have supported documentary and design aspects of the project work.Young people have taken part in photo walks, portrait sessions and visiting the bridge itself. One particular highlight was seeing young people experience the bridge through the eyes of a drone during a Barefoot Project youth session.

Around 40 students from Riverside Primary School and young people from Barne Barton made cyanotype prints using images they had taken of the bridge and inspired by archive images. Cyanotype is a photographic printing process discovered in 1842 which involves producing a white image on a deep blue background. The students used seaweed to create and later made digital negatives to create completely new artworks. These cyanotypes can be seen on the new panels on the bridge.

A music project has also been taking place, with local bands creating five new music videos about the bridge. The young people involved in these use a range of genres including electronica, R&B and the inclusion of dance.

As well as the new display of photos and oral histories, there will also be some family friendly animation workshops taking place during half term to create a piece to celebrate the anniversary of the Bridge.