Due to ongoing bridge engineering works, the maximum width of vehicle that can cross the Tamar bridge is 2.9m (9’ 6”). Vehicles in exceeding 2.9m (9’ 6”) must seek alternative routes. 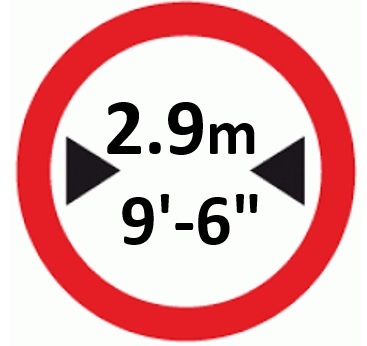 Wide loads will not be allowed to cross the bridge and will be asked to turn around and seek an alternative route.

The works are expected to start August 2020 until October 2020

1. Loads either exceeding 44 tonnes in gross weight or over 2.9m wide are considered to be abnormal loads.

Loads exceeding 4.8 metres in overall height must also be notified.

2. All abnormal loads must use the main deck and NOT the north or south cantilever lanes.

3. All abnormal loads must receive prior permission to cross. Such permission, if granted, may impose constraints on engineering grounds in respect of lane assignment, speed of crossing and maximum prevailing wind speed/direction. Some applications may require a detailed structural assessment at the haulier’s expense. (See Notes on below Schedules).

4. Prior to granting of permission to cross, a fully completed Tamar Bridge Application For Abnormal Load Crossing Parts I and II form must be submitted in advance giving the details of the proposed journey, the load characteristics and providing indemnity. Failure to do this will result in the request being automatically refused.

5. To gain permission for abnormal loads to cross the Bridge the application form must be submitted in advance to the Bridge Office giving the following minimum notice periods:

7. Charges with effect from the 1st January 2003 are as set out on the Schedule of Charges. In order to minimise disruption to other users, the Joint Committee encourages off-peak abnormal load crossings by offering crossings at night at normal vehicle rates. Schedule A covers Standard Charges, and Schedule B covers Concession Charges for Night Crossings From 23.30 hrs to 06.29 hrs. In addition, hauliers making frequent crossings (more than five per annum) may qualify for discount on standard charges. Details of such discounts are available on request from the Tamar Bridge Admin Office.

9. Once safely parked within the layby, please telephone Bridge Control (24hrs) on 01752 361577 and await further instructions.
DO NOT ATTEMPT TO CROSS THE BRIDGE OR ENTER THE SALTASH TUNNEL WITHOUT APPROVAL.

10. Hauliers and drivers are advised that the Tamar Bridge has comprehensive recorded CCTV coverage and a ‘weigh-in-motion’ facility which records axle loads, vehicle weights and registration numbers of all vehicles. Any abnormal crossings made without permission will be identified and the offenders pursued through the courts if necessary, and with the assistance of the police and other authorities where appropriate.